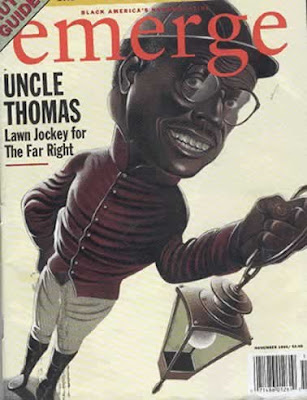 I’ve always been an outspoken critic of political homogeneity based on identity. Like many young males, the word marriage sends chills down my spine. But the thought of party or ideological marriages irks me even more. However, I cannot begin express my outrage of Supreme Court Justice Clarence Thomas’ decision to dissent in the case to nullify Section 5 of the Voting Rights Act.

Under Section 5, any change with respect to voting in a covered jurisdiction — or any political subunit within it — cannot legally be enforced unless and until the jurisdiction first obtains the requisite determination by the United States District Court for the District of Columbia or makes a submission to the Attorney General. This requires proof that the proposed voting change does not deny or abridge the right to vote on account of race, color, or membership in a language minority group. If the jurisdiction is unable to prove the absence of such discrimination, the District Court denies the requested judgment, or in the case of administrative submissions, the Attorney General objects to the change, and it remains legally unenforceable. (http://www.usdoj.gov/crt/voting/sec_5/about.php)

Clarence Thomas, the lone justice to dissent, believes that section 5 is unconstitutional because it holds states to binding conditions based past on past discrimination. Maybe with the election of Barack Obama, he too is under the false impression that we live in a post racial society. Or maybe in his quest to adorn the garb of right wing extremism he felt that it was duty to vote that way. I am as perplexed as the next person. Nonetheless, it is highly disappointing on many fronts.

For a man who writes so reverently in his memoir My Grandfather’s Son, about his grandfather who raised he and his brother in rural Georgia, I wonder if he has a bad case of amnesia. If he has any inclination for history, he would know that the man who reared him was stifled in realizing his full citizenship in the United States. This hindrance was through discriminatory laws that kept he and many other Blacks from the polls. Once more, he would remember Fannie Lou Hamer and the Mississippi Freedom Democratic Party who courageously fought to be seated as delegates the 1964 Democratic National Convention.

But hey, maybe this is just ancient history. I mean an unprecedented number of Black folks came out to the polls for the 2008 Presidential election. Oh wait let’s not forget the 2000 Presidential voting debacle in Florida. Originally the exits polls had predicted a solid George W. Bush win. However, on Florida’s Gold Coast, that urban cluster that includes Miami-Dade, Broward, and Palm Beach (heavily Democratic and Black counties) had not been counted. By that next morning Gore had considerably narrowed the margin of the Bush lead. The slim margin called for a recount. Ultimately, the Supreme Court ruled that Florida’s ruling requiring a statewide recount was unconstitutional. The problem surrounding this whole fiasco was the voting irregularities that many people in those counties said they faced. There were close to 50,000 ballots purged because the voters were “alleged” felons. Many of those folks were Black. Duval County had the largest number of reject ballots in Florida – 27,000. More than 9,000 of the “overvotes” came from predominately Democratic and largely Black precincts in Jacksonville. Either Black people in the state of Florida were really uninformed about voting procedures or there were truly irregularities at the polls. I choose to think the latter. Florida is a prime example of why Section 5 of the Voting Rights Act is so important.

Clarence Thomas doesn’t need to appease anyone. Heck, he has a guaranteed lifetime job. However, it disheartening to think that he believes that we have arrived at an epoch in time where we can eradicate a clause that has been so fundamental in protecting the rights of marginalized people.