Ebony Wilkerson ordered to be committed to mental health facility 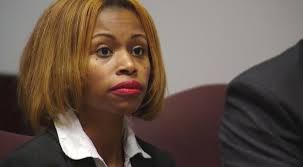 A mother of three who drove her children into the Atlantic Ocean in March was ordered to be committed to a state mental hospital for the crime.

Circuit Judge Leah R. Case found that Ebony Wilkerson met the legal standard of being “menifestly dangerous to herself and others,” according to NBC.

Wilkerson was taken into custody and will be held temporarily in jail, said Ludi Lelis, a spokeswoman for the 7th Judicial Circuit.

Bystanders charged into the water off Daytona Beach, Florida, and freed the children — ages 10, 9 and 3 — after Wilkerson steered her minivan into the surf.

Wilkerson, 33, had pleaded not guilty by reason of insanity after prosecutors agreed to drop charges of attempted murder. Her court-appointed lawyer had argued that she was stable enough to get conditional release.

In May, Wilkerson was released from jail on the condition that she has no contact with her three children who are in state custody. She gave birth to a baby boy while incarcerated, who lives with his father.

May Ms. Wilkerson get the proper treatment she needs.