Feature: Why does a black butt only look good in white skin? 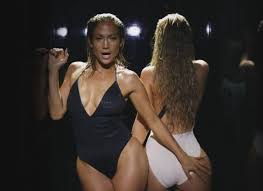 The following post is from The Guardian.  It was written by Yomi Adegoke.

“Big, big booty. What you got a big booty,” is how the chorus to Jennifer Lopez and Iggy Azalea’s derriere-themed ditty goes – over and over. The aptly titled “Booty” video was released last week, and in anticipation, American Vogue wrote its own ode to the more plump posterior.

Despite probable good intentions, the article jarred, mainly because Vogue lauding big bums is quite like Peta (People for the Ethical Treatment of Animals) penning a love song to the fur gilet. For it was Vogue, along with most other mainstream women’s magazine, that made bigger bottoms the butt of fashion industry jokes for years. So the attributes that black women have so long been shamed for have finally been given the Anna Wintour seal of approval due to a new Aryan aesthetic? It is almost too much to bear.

The New York Times then jumped on board the bum bandwagon with a feature on Jen Selter, a white Instagram star credited for pioneering what black women have always had.

The era of the big booty has neither started nor ever stopped for black women, and even if it had it wouldn’t be the likes of Iggy Azalea, Miley Cyrus or even J Lo we’d be attributing a rear renaissance to. Despite what the mainstream media told us, black women never stopped aspiring to possess the curves society so hated; we chortled in cinemas at Queen Latifah’s glee from a yes response to the age-old question “Does my butt look big in this?” in the 2005 comedy Beauty Shop. It was an in-joke; funny, because in a world where white is right, that was most definitely the wrong answer. Yet now, brands puff behind us as they desperately try to catch up, tippex in hand, ready to white up things that have always existed among the minorities they have continually chosen to ignore.

Big bums are only the latest in a long line of things that have become fashionable at the media’s say so. There are many current crazes described as “fresh and funky” by herds who think they’ve stumbled across something new, entirely oblivious to the mass eye roll from exasperated ethnic minorities. So common is the process, it has its own term and Twitter hashtag: #Columbising – when, like Christopher Columbus, white people think they have discovered something that was already in existence.

There are others parts of black culture now deemed good enough to gain a level of mass respectability after getting a belated thumbs up from white society. There’s the apparently “cutting edge” hairstyle featured in serial cultural appropriator Katy Perry’s This is how we do video. The black and Latino communities have been gelling down baby hairs – the shorter, softer hairs on the hairline – for decades, but the styling technique was filed by the fashion world under “ghetto” until its wearers were white.

And who can forget a few years back when the bright, gaudy, rhinestoned nail designs popular with minorities made the jump from chavvy to chic as soon as the masses cottoned on? Even bantu knots, a style sectioning off hair in squares and then twisting it into knots, made its “debut” by Marc Jacobs models during New York fashion week, though they have been fashionable within the black natural hair community for years. Beyond this new found “acceptance”, the black female body is still played for laughs as butt prosthetics become the new blackface, with both Miley Cyrus andKaty Perry using huge novelty bottoms as performance props in a bid to appear contemporary and comedic while accessorising the black aesthetic. Let’s face it – black people have been accustomed to cultural appropriation since Elvis was crowned the illegitimate King of Rock and Roll. What is truly insidious, however, is that while white people’s adoption of a minority trend sees its status skyrocket, the very opposite happens when black women hop aboard a fad.

Take, for example, the Twitter trend #ThingsBlackGirlsHaveRuined, which saw the values of Michael Kors watches, Timberland boots, Louboutin heels and most bafflingly, red velvet cake plummet simply for being popular among an undesirable demographic. Similar snobbery led to Jay-Z boycotting Cristal, a brand of champagne rappers such as himself had helped bring into public consciousness, after unsavoury comments from its managing director hinted at a less than enthusiastic view of hip hop. Class and skin are closely intertwined; for what makes a white girl with a chin piercing, brightly dyed hair and arm tattoo alternative and a black woman with the same modifications ghetto, bar the colour of her skin?