Misuse of a Grand Jury 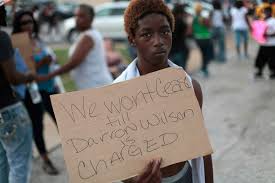 The following piece is from Huffington Post. It was written by Rev. Al Sharpton.

It has been over three months since the horrific death of unarmed teenager Michael Brown in Ferguson, Missouri. It has been over three months since Brown’s parents and loved ones began awaiting a semblance of justice and closure on this painful chapter in their lives. And it’s been over three months since a community started searching for answers and justice after another one of its children died at the hands of police.Over in Staten Island, New York, we have a similar situation regarding the death of unarmed father of six Eric Garner. Today marks exactly four months since he died after being placed in an apparent illegal chokehold by police. In both of these tragic cases, a grand jury has been convened to determine whether or not there should be criminal charges brought against the officers involved. So if the grand jury’s stated role is to simply ascertain whether or not there should be a case against the accused, then why are they acting as if this is the trial? When did a grand jury transform into a trial jury?

Following Michael Brown’s death, I went to Ferguson and met with his parents. I stood with them as they tried to hold their heads high and deal with both their immense loss and the larger issues of police-community relations. My organization, National Action Network (NAN), was on the ground talking and meeting with people in Ferguson, just as we did in Staten Island following Eric Garner’s death. What is alarming is that after all of this time, in both cases, we are still waiting for the grand jury to come back. When there are enough witnesses who say Officer Darren Wilson acted improperly, then why not go to trial, allow both sides to present evidence and make their case, and then let that jury determine Wilson’s guilt or innocence? And in Staten Island, when you have video showing the alleged chokehold used on Eric Garner, why not go to trial and have the officer(s) explain the tape, and then this jury can determine guilt or innocence? The tape should guarantee that there should be a trial.

Exact figures on the number of people killed by police are extremely difficult to locate because there really isn’t a central database of such things. But following Michael Brown’s death, The Economist ran a piece in which they claimed deaths in the U.S. from police shootings for the latest available year was 409, while in places like Japan and Britain, it was zero. If we do not begin to comprehend that we have a serious problem in the manner in which we police certain communities, then we will continue to fail the next generation. And if we do not hold everyone — including police officers — responsible for their actions, then we are not living up to our own standards and rule of law.

If a grand jury is hearing evidence tantamount to what they would hear in a jury trial, then what is the point of a grand jury? In Ferguson, there are witnesses who say Brown had his hands up when he was shot. That should be enough probable cause to go to trial to then determine if Officer Wilson is guilty or not. It is at trial that he can then defend himself and his attorneys can present their own witnesses and their own defense. In Staten Island, the video of the chokehold is enough evidence to warrant a trial where, again, the officers can then defend themselves. And in addition to the tape, a City of New York medical examiner also ruled his death a homicide.