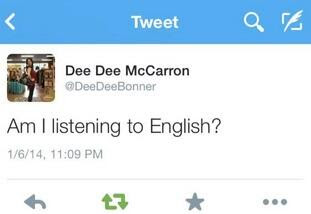 During Winston’s post-game interview, Dee Dee Bonner, the mother of University of Alabama quarterback AJ McCarron, took to Twitter to ask a question about the interview.

“Am I listening to English?”, Bonner tweeted.

Winston went on to answer several questions and while the answers might not have been wholly articulate, they were absolutely in English.

“I said guys, we didn’t come here for no reason,” Winston said. “I said, ‘Guys, this is ours, man.’ All the adversity we went through the first few quarters, it was ours to take. And like I’ve been saying, we control our own destiny, And those men looked me in my eye and said ‘We got this Jameis.’ I said, ‘Are you strong?’ They said, ‘I’m strong if you strong.’ I said, ‘We strong then.'”

Later that evening, Bonner tweeted an apology, claiming her initial tweet was not meant to be racist.

Rachel Jentel, the friend of Trayvon Martin received similar backlash during her testimony in the George Zimmerman trial.

Critics argued they could not understand the woman’s dialect, as it was comprised of a heavy Caribbean accent and youth slang.

Thoughts on Bonner’s tweet?Racist or not racist?

Is this another case of Rachel Jentel all over again?