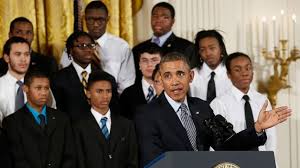 The following post originally appeared on The New York Times under the title, “The Girls Obama Forgot.” It was written by Kimberlé Williams Crenshaw.

But this seemingly obvious point is not reflected anywhere in the president’s signature initiative on race — My Brother’s Keeper, a five-year, $200 million program that will give mentorships, summer jobs and other support to boys and young men of color, most of them African-American or Hispanic, and that entirely omits the challenges facing their mothers and sisters. At a meeting in Washington last week to announce new commitments to the program from corporations, school systems and nonprofits, Mr. Obama gave a perfunctory shout-out to “all the heroic single moms out there,” but did not utter the word “girls” even once.

Mr. Obama has told us why men of color are his focus. His moving story of the Kenyan father he knew for a month and the Kansan mother who went on to raise a president speaks volumes about his passion. But My Brother’s Keeper highlights one of the most significant contradictions of his efforts to remain a friend to women while navigating the tricky terrain of race. It also amounts to an abandonment of women of color, who have been among his most loyal supporters.

Perhaps the exclusion of women and girls is the price to be paid for any race-focused initiative in this era. “Fixing” men of color — particularly young black men — hits a political sweet spot among populations that both love and fear them. Judging from the defense of My Brother’s Keeper by many progressives and the awkward silence of their allies, the consequent erasure of females of color is regarded as neither politically nor morally significant.

Gender exclusivity isn’t new, but it hasn’t been so starkly articulated as public policy in generations. It arises from the common belief that black men are exceptionally endangered by racism, occupying the bottom of every metric: especially school performance, work force participation and involvement with the criminal justice system. Black women are better off, the argument goes, and are thus less in need of targeted efforts to improve their lives. The White House is not the author of this myth, but is now its most influential promoter.

The evidence supporting these claims is often illogical, selective or just plain wrong. In February, when Mr. Obama announced the initiative — which is principally financed by philanthropic foundations, and did not require federal appropriations — he noted that boys who grew up without a father were more likely to be poor. More likely than whom? Certainly not their sisters, who are growing up in the same households, attending the same underfunded schools and living in the same neighborhoods.

The question “compared with whom?” often focuses on racial disparities among boys and men while overlooking similar disparities among girls and women. Yet, like their male counterparts, black and Hispanic girls are at or near the bottom level of reading and math scores. Black girls have the highest levels of school suspension of any girls. They also face gender-specific risks: They are more likely than other girls to be victims of domestic violence and sex trafficking, more likely to be involved in the child welfare and juvenile justice systems, and more likely to die violently. The disparities among girls of different races are sometimes even greater than among boys.