Ray Rice: ‘I have to be strong for my wife’ 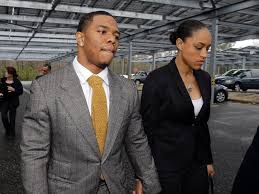 A day after a video showing former Baltimore Ravens player Ray Rice hitting his then-fiancee in the face during an altercation in a hotel elevator, the former running back has finally broke his silence.

Rice’s comments come after the NFL decided to indefinitely suspend him after his release from the team. The remarks also follow a statement released by his wife, Janay Rice addressed the incident.

ESPN’s Josina Anderson spoke to the Rices by phone Tuesday. Asked how he was doing, Ray Rice responded, “I have to be strong for my wife. She is so strong. … We are in good spirits. We have a lot of people praying for us and we ‘ll continue to support each other.”

Rice added, “I have to be there for [Janay] and my family right now and work through this.”

After that, Ray handed his phone to his wife. “I love my husband. I support him,” Janay Rice said. “I want people to respect our privacy in this family matter.”

TMZ Sports released he video that showed Rice assaulting his wife on Monday. The site also reported in Tuesday that sources connected with the Revel Hotel and Casino where the incident took place told TMZ Sports no one from the NFL asked to view the video from the Feb. 15 incident.

Instead, the league relied on previously released video that showed Rice dragging Janay — who is seemingly unconscious — from the elevator before suspending him for two games.

The Ravens said Monday that they had not seen the video released by TMZ Sports. In response to questions of why the team wasn’t able to view the video sooner, coach John Harbaugh told reporters, “I don’t know why that would be a hard thing to understand. It wasn’t available. It wasn’t there for us. It wasn’t something that we ever saw or had access to.”

The NFL also stated that authorities did not make the video available. TMZ claims the league did not ask the hotel for it.

The Ravens are not expected to further address the situation.