The exploitation of Terio 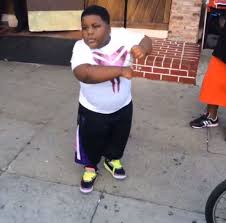 The following piece was written by William C. Anderson, and appeared on EBONY.com under the original title of “Lil Terio Isn’t a Little Man.”

By the time I discovered lil TerRio, hundreds of thousands of people had already shared clips of the 7-year-old Georgian dancing. There was no doubt to me that he was going to be a big deal. The viral clips with his ‘play cousin’ filming, laughing, and saying “ooh kill ‘em” quickly became impossible to avoid. But I could not help but to wonder about how safe this newfound stardom would be for the elementary schooler.

TerRio’s vines slowly went from being funny clips of a little boy dancing, to clips of a child being put into questionable situations. Often shirtless and put into positions that seemed too adult, I began to feel bothered about the boy’s circumstances. One clip I came across disturbed me to no end. Situated in a large closet sink shirtless, TerRio rubs himself while uttering “I’m taking a bath, I’m taking a bath.” The comments on the vine were centered on TerRio’s body size and his breasts. A Google search for the words “TerRio child” now automatically generates the words “child protective services,” and “child abuse” as recommendations. And I cannot say that I am surprised.

He is often casually placed in photos with adult women where the women are being sexualized. A glance at his Instagram account illustrates my point. And it was one tweet in particular I saw that lead me to write this post. Twitter user @LIGHTSKlN casually posted a picture next to TerRio stating “Just f*cked Terio.” You have to wonder what’s going on inside the mind of a child-star who is constantly surrounded by the likes of misogynist rap celebrities; a child whose appearance is used to charge $8,000 to nightclubs using his celebrity presence.

Many have already pondered if TerRio is being exploited or not. I challenge people to question why it’s so much harder to answer the question when we look at young Black males. What continues to drive the mindset around the implausibility of Black male harm; we who are one iced tea and a hoodie away from death on a dark night, we who are automatically seen as abusers and not the abused, and we who are told that our bodies alone are deadly weapons. Our race makes us generate trepidation in our own neighborhoods and certainly in communities that are not our own. Why is it impossible to recognize such clear exploitation when the victim in question is a Black boy?