The Fantasy of Football

A few years ago duri 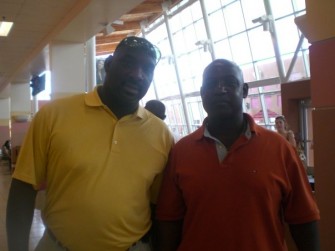 ng a trip to Las Vegas, NV (the only place not named Fort Wayne, Indiana where my father willingly spends the night), I spied Doug Williams in the food court of an outlet mall.  My father, sister, and I were sitting at a table eating crappy fast food when I spotted a really big black guy I knew I wasn’t related to heading in our direction.  I told my dad, and as Doug Williams walked by, my dad said his name and Doug Williams waved.  My dad seemed really excited, so I convinced my sister to go ask Mr. Williams to take a picture with him; he was kind enough to oblige.  I remember two things about that day: 1. My father calling everybody he knew and telling them how he took a picture with Doug Williams, and 2. How Doug Williams shuffled through the food court.

For those of you not at all invested in American football, Doug Williams is known for being the first black man to quarterback an NFL team, the Washington Redskins, to a Super Bowl win; he’s still the only black man to do so.  I know that doesn’t seem like a big deal with Donovan McNabb, Jason Campbell, and Michael Vick having all stood under center as starting quarterbacks just yesterday, but  a black quarterback circa 87-88 was the equivalent to a married black woman in 2010 (I kid, I kid).  Doug Williams was the man.  Cheering for him (and Warren Moon) was a bazillion times more intense than rooting for the black person on Jeopardy! And leading the Redskins over John Elway and the Denver Broncos earned him a spot as a minor deity in the pantheon of black American heroes.  Seriously, he sits right next to Tupac and Richard Roundtree.

But that summer afternoon in the air conditioned food court, Doug Williams didn’t at all look like the same warrior I saw in those highlights or read about in Jet after the Redskins won the Super Bowl.  He looked hurt, battle-worn, struggling to arrive at his destination.  And I know he’s not the only one.  The other day I read of a player, I can’t remember which, who would sit on a stool to play catch with his son because he can’t bend his knees very well.  I need not discuss the traumatic head injuries players endure.  In week 1 alone, at least three players suffered concussions.  The microphones on the field amplify men crashing into each other; sometimes, the sounds make me shiver.  Still, I watch.  We all watch.

In fact, I’ve become increasingly obsessed with football.  I had always kind of been a casual observer of the sport.  Football was a way for me to engage with my father and stepfather.  Growing up, the most time my stepfather and I ever spent in a room was always on Sundays.  He on one couch, me on the other–as far away as possible–watching the pre-Manning Colts get their butts kicked.  In fact, taking in a Colts game in the old Hoosier Dome might have been the longest time we ever sat next to each other.  Whenever my father calls, I know that I can get at least five minutes of conversation by bringing up football.  Each Thursday, my calls me so we can discuss his football picks for his pool at work.  I have no idea how much money I’ve won for him.  I’m still waiting for my cut.

I know it’s one of the most brutal sports, but I can’t stop watching, being emotionally drawn into every game.  I love the intricacies of the offensive and defensive schemes, the spiral of the ball.  I love the fact that on any given Sunday, anybody can win.  Pre-season Super Bowl picks mean nothing.  I love the anonymity of the game–on and off the field.  Not many of us could recognize an offensive lineman.  Doug Williams walked into the food court, and it was as if my father and I were the only ones who knew who he was.

My love of football might be the most American thing about me.  Indeed, football seems like such a profoundly conservative sport; it’s full of Republicans.  Perhaps that has to do with where the sport is most popular: Florida, Texas, Alabama, western Pennsylvania.  Football is such an American practice: 1. It’s inherently violent;  2. The quarterback almost always wins the Super Bowl MVP, when someone less glamorous often deserves the award; 3.  It’s totally gay and homosocial, but masks such realities with performances of brute masculinity; 4. Most tellingly, we give the rest of the world the middle finger by calling football, well, football.  Everywhere else on the planet, football is, well, soccer.  Yet we show our hubris by refusing to comply.  We don’t care about soccer because we suck at it.  Instead, we symbolically reify our exceptionalism by making American football, a game no one else in the world cares about, our most popular sport.

Watching football is my tacit participation in an American ritual.  The face painting, the tailgating, the donning of our favorite player’s uniform, are all ritualistic performances.  Football players are our  gladiators; this is our bread and circuses.  I think I cling to football not simply because it has allowed me a certain access to the men in my life, but also because my critiques of this, our culture–as seen on this blog, for example–have often isolated me from social practices I grew up participating in.  Most Sundays, football feels like my American touchstone.  Still, I know what allows me to continue to watch is an investment in a fantasy that those men in helmets won’t end up walking around like Doug Williams–or worse.  And what’s more American than believing in a myth that shields us from the brutality of the truth?  Football is (this American) life.

All that said, Gargamel’s Revenge needs Drew Brees and the 49ers D/ST to have a mediocre game tonight.  We’re only up by 30 points going in to Monday Night Football.  The Flux Capacitors have a healthy lead, and should be 2-0 by the end of the night.

Go ‘9ers.  (Jerry Rice is the greatest football player ever.)