The Problem with LeBron James

Contrary to popular belief I don’t dislike LeBron James. I almost feel sorry for him. He has been commodified since he was about 16 years old. I was a sophomore in high school the first time I saw him on television. And then he was on the covers of magazines. All before he even arrived on stage at the NBA draft. 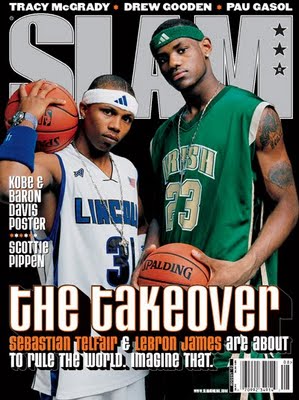 It’s an unfortunate set of circumstances for him that his career will be measured by the number of games, playoff series and championship rings he wins. Plenty of great players have retired with no ring and debatable legacies. LeBron James doesn’t have that luxury. Win. Win multiple times. And do so while dominating your challengers or your legacy is tarnished. This is the pressure the media and public have put on a 27 year old man.

And when he doesn’t perform to our unbelievably high standards, we say that he’s a choke artist. But let’s just be clear. LeBron James’s faults are our own. He’s arrogant because he’s been gracing the covers of magazines since before he could vote. He’s arrogant because millions of us tuned in to watch him announce his next team. We made LeBron James. We talked about how difficult it would be for him to ever win in Cleveland and then balked at his Decision to leave, questioned his loyalty and blamed him for taking the easy route. Yes, he actively participated in his creation and has relished in it at some times and withered under the requirements at other times. But we started the process.

He’s 27 and he’s been consumed whole for the past 11 years of his life. Fortunately for him, he’s managed to lead the Miami Heat to a 3-1 series lead over the Oklahoma City Thunder. While I am no fan of his, I hope that he’s able to close this series with no problems, for his sake and for the sake of his loudest supporters. Because if they struggle to win the NBA Finals, the questions will remain.