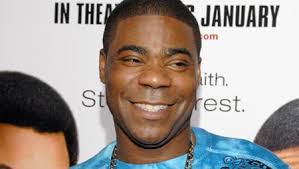 “He has been more responsive, which is an incredibly encouraging sign,” publicist Lewis Kay said Sunday.

The wreck took place about 1 a.m. Saturday when the limo van Morgan was in was hit by a tractor-trailer on the New Jersey Turnpike, police said.

Comedians Ardie Fuqua and Harris Stanton were among the injured, as was a man named Jeffrey Millea.

Morgan sustained several injuries from the crash, including broken ribs, a broken nose, leg and femur. He underwent surgery on his leg Sunday. He is expected to remain in the hospital for several weeks.

Walmart truck driver Kevin Roper, 35, was charged with one count of death by auto and four counts of assault by auto. He turned himself in to police and was released on $50,000 bail Saturday.

Our thoughts are with Tracy Morgan and the family of those involved in the crash. Wishing you all a speedy recovery!