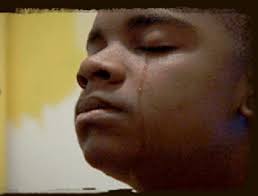 An interesting story was circulated through the news media this week. It was about a mother who forced her son to wear a sign “I lie, I steal and sell drugs.” As this story was being analyzed and chopped up by different media reports, I started to realize the big story wasn’t about the mother being a bad person. It was more about where is the father throughout all of this.

It is extremely hard to read stories like this because I reflect back to my childhood and adolescents days when my father wasn’t around.  Now that I’m a little older it is easy to see that some of the trouble that I got into in my teens could have taken a different route if my father was around. His voice alone would be the discipline that I needed and would scare me straight.

Though I commend the Mom for taking the necessary steps to make her son realize that the path he is going down is not good. I am so passionate about building this generation of young fathers to have more impact in their child’s life. The father brings a sense of security and safety, not to take away anything from the hard work a mother does. It is just different roles that both parents play.

Fathers if you have a child and have not stepped up to the plate or are ashamed for not being there it is never too late. I know the mistake my father made when he tried to re-enter into my life. He did not realize the hurt and pain he caused me. Instead he wanted to live from now and not reflect on the past to move into a better future. So own up to what you did and don’t go around making excuses just keep it real. If they accept you back or not at least you tried. Fathers are more important than ever in today’s society.