Why the young opinion matters more than anyone else’s 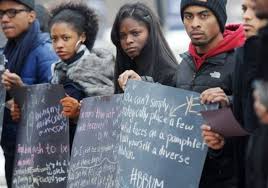 As we ease out of the era where the opinions, thoughts and sentiments of young people are swept under the rug, an emergence of power is brought to the surface. It wasn’t even ten years ago that legislators, community members, parents, etc. were the only ones whose voices were amplified regarding issues that affected youth the most. It’s still that way, but gains are being made.

Thanks to technology, mentoring and a greater sense of self, young people’s opinions FINALLY have somewhat of an audience. SOMEWHAT.

Many adults are guilty of silencing the young opinion in the name of “claiming to know what’s best” for our youth. While I’m not arguing against the importance of protecting our babies, we cannot promote the denial and rejection of their opinions because we feel that issues are too complex for them understand. The reality is that our youth are becoming more and vocal, and are not standing idly by as lawmakers decide their future.

The “I, Too Am Harvard” campaign garnered more than just national attention. It kicked off a movement, where thousands of black college students across the nation, and on two international campuses, stood in solidarity for equality and recognition. The campaigns joined a growing list of actions executed by young, bright people, who are simply responding to the world around them. #BBUM protests both on and offline are another example.

Youth aren’t just saying no to injustice, discrimination and bias on campus, they are standing in the midst of the storm to prove their loyalty to change and inclusion. The Black Youth Project memos offer an even more in-depth look at how young people view the world around them. In the reports, youth express very candid opinions about the Affordable Care Act, the Legal System,  Military Conflict among other things.

The subjects listed above are often associated with an older crowd. Young people are thought to just be concerned with their current life, which is usually reduced to bullying, dating, friends, technology, parties, etc. by mainstream media. The truth is that young people do care about political issues, and acknowledge the significance of world events, trends and forms of legislation on their lives. Their opinions matter more than those meant to serve the public’s interest, as they are the ones who will be served. We cannot forget that the very same young people who we silence, will turn into opinionated adults, some of whom will lead this country.

So let’s arm them with encouragement to not just form an opinion, but to take an active role in reshaping America’s political, economical and structural system.