I understand that businesses want to protect their brand, but are they protecting their band or racially profiling? When can racial profiling be justly called? From personal experience, I can say that some businesses would rather lose a few customers than to open their minds and doors to a more diverse crowd.

I remember I was out with a few friends. It was a lovely day and we wanted to enjoy the festivities of Saint Patrick’s Day like everyone else. Going to a small bar, we waited in line only to find the bouncer telling my male friend that his pants were too baggy. My friend who was wearing fitted, boot cut jeans with a casual shirt and jacket was caught off guard by the bouncer’s reason for not allow him, which ultimately was all of us into the bar. Looking inside the bar, the customers were all white as the bouncer was and I was pretty much tired of the indirect prejudices so I said: “Just tell us the REAL reason why you don’t want us at this bar?”

Meanwhile a white guy gladly walked in WITH baggy jeans and I was beyond appalled.

I was furious beyond belief but grateful to not have spent my money on a business that didn’t respect me based on how I looked. If they don’t respect you, right reviews and report the business. At least others will know to take their money to businesses that cater to a more diverse demographic.

Bar Louie, which is quite popular and well known, has provided its own list of dress codes that seem to target a specific group of people: Black males. Reading the list that posted in the Bar Louie Minneapolis location, I could only think of Black men, particularly younger Black men who dress with the more trendy styles.

Racism and its prejudice acts have transformed into indirect and insidious methods, dialect, and behavior that promotes the same harmful effects.

Instead of blatantly prohibiting a person because of their skin color, businesses have found a way to segregate their customers from the ones they want and the ones they don’t. From skin color to clothing attire, we are now targeted based on what we wear. 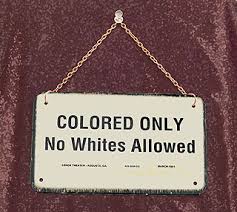 Some may say “Well there are people or Black guys who DO dress like this, so why not change the way they dress?”

From my example above, this “dress code” may mask the discrimination some may face even if they are wearing the proper attire. This doesn’t change their ethnicity.

I can only say that if a business doesn’t cater to your needs and would rather cast you aside based on discriminatory beliefs, write a review, report them and take your money to a business that does OR: CREATE YOUR OWN BUSINESS.