Family of Jovan Belcher to have body exhumed for brain examination 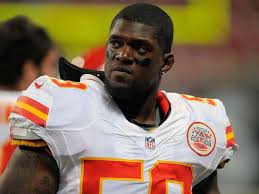 The family of an NFL player who killed his girlfriend before taking his own life last year is requesting that his brain be examined.

Kansas City Chiefs linebacker Jovan Belcher played for four NFL seasons, and had no documented history of concussions, but his family hopes the examination will lead to answers about why the tragedy occurred.

[…] Kash Kiefer, a former teammate at Maine and close friend, told Bleacher Report last month that “Jovan suffered multiple concussions. But in football, you don’t complain. You play. That was Jovan. He played.”

More details from the Star: “Other stories emerged that Belcher had become unpredictable and irritable in the months leading up to the murder-suicide and was beginning to drink more — an autopsy showed his blood-alcohol level on the morning of the murder-suicide was more than twice the legal limit in Missouri. These stories matched a lot of what we know about the effects of CTE (a degenerative disease caused by repeated head injuries).”

The results of the autopsy depend on how well Belcher’s body and brain are preserved. While Omalu has found evidence of Alzheimer’s in bodies buried longer than a year, Belcher died from a wound to the head.

Even if Belcher’s brain is found to have suffered from CTE, that alone is not responsible for the murder-suicide. At least  five current and former NFL players died from self-inflicted wounds since 2011. The suicides have called attention to the league’s safety concerns and how they protect players from injuries.

Thoughts on the procedure?

Should the NFL take a closer look at how they are protecting players in the league?