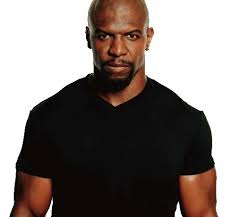 Terry Crews has responded to the Ray Rice abuse incident by opening up about his own experiences with domestic violence.

The 46-year-old actor/comedian shared how the Ray Rice elevator altercation affected him, as well as what he witnessed in his household growing up.

“When I saw the video I was immediately taken back to my childhood,” Crews said. “This is the way I grew up. I used to watch this happen over and over again. It was a post-traumatic stress experience for me. I used to watch my father hit my mother in the face and watch her go down and there was some things that just affected me more than I don’t think anyone could realize.” […]

“The NFL culture, the sports culture, has decided that they are more valuable than women,” Crews believes. “I’ve heard people laugh about keeping their pimp hand strong and keeping her in control so that she knows her place. But think about how evil that is for one man to think that he’s actually more valuable than a woman, because as a human being you’re worth is immeasurable.”

Since TMZ made the video public on Monday, Rice has been released from the Baltimore Ravens squad and indefinitely suspended by the NFL.

Crews says that his stance against domestic violence has yielded negative comments from other men. “Because of my stance on domestic violence and standing [up] for women I have tons of men coming at me like ‘You are a punk, you are a punk, look at you, get your skirt and go pop your pecks somewhere’…This is the mentality I’m talking about, the challenge, the male pride…Pride is a thing that kills you…Male pride is so tough that they feel that any time a woman back talks it’s they’d rather die than stand for that, than actually have a women tell them what’s up and then they would say, ‘Ok you know what, I got to hit her. I got to lash out.'”

Way to stick up for what’s right Mr. Crews.