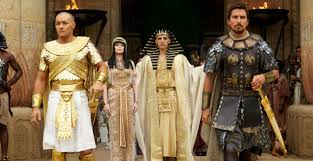 The following piece is from Medium. It was written by David Dennis Jr.

Ridley Scott’s Exodus: Gods And Kings movie is racist as shit. And it’s disgusting, lazy and a movie that people shouldn’t still be making in 2014.

There was a time when I was fed up with the idea of religion, Jesus and the way they’re both used to oppress seemingly as many people as they save. I spent three months studying abroad in Ghana — in the villages and more impoverished areas of the country for the majority of that time — and I saw how so many “missionaries” were conflating “converting people to Christianity” with “convincing them that they’re uncivilized and need to be westernized.” This all came with billboards of a blonde-haired blue-eyed Jesus. Churches where traditional African garb was replaced with suits and ties in 90-degree weather because that was somehow the proper way to worship. I remember distinctly walking around with a White classmate of mine — he was blonde with a beard and sandals on — as he got stopped by a Ghanaian who couldn’t believe how much he looked like Jesus. I spoke to one taxi driver who explained that Judas was the only Black person in the Bible. I saw firsthand the crippling mental oppression and inferiority that religion can bring. I didn’t want any part of it.

Which brings me to Friday night. I went to see Get On Up and there was a preview for Ridley Scott’s Exodus: Gods And Kings movie about Moses’ story in the Bible. The first thing I noticed was that all the main characters are White. Moses is White. The Pharaoh is White. Tuya is super White and Joshua is Jesse Pinkman. Not only are these characters who are supposed to be Africans White, they’re not even remotely tan. They’re pearly White. Christian Bale is Moses, a former slave in Egypt who was using SPF infinity sunscreen because he’s still Gotham City White. You can convince me that a guy can shake a staff and make it rain locusts but I refuse to believe someone who grew up in Egypt in the sun doesn’t have a tan at least. But this is all Hollywood stuff, right? White guys are always cast in these roles and we’re all here to throw praise on a cast full of White guys no matter where or when they live. It would have been annoying enough if Scott stopped there. But look at the rest of the cast.

Not only are all the main characters White, but the servants, thieves and assassins are played by Africans. Guys. This is racist. Ridley Scott is one of those guys who’s apparently hellbent on historical accuracy but doesn’t care enough to cast a person of color as Moses or a goddamn African queen while simultaneously filling out the rest of the movie with Black servants and thieves. I could even accept him going the Louis CK route of “the best actor gets the job regardless of if race makes sense” and casting Merly Streep as Tuya, Benicio Del Toro as Moses and Choi Min-Sik as Rhamses for all I care. But to make the main characters White and everyone else African is cinematic colonialism. It’s creating a piece of historical “art” that carries on oppressive imagery that’s helped shackle entire countries and corners of the world.