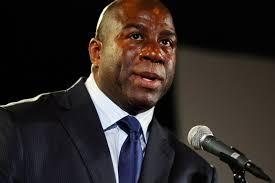 Ferry, who is on a leave of absence for racist comments he read aloud from a 2012 email about Miami Heat small forward Luol Deng.

Just had a heart to heart meeting w/ Hawks GM Danny Ferry! He apologized for his comments about Luol Deng & the African American community.

In our meeting Danny Ferry’s apology was very sincere.

I have a lot of respect for Danny because he called and wanted to talk about how his comments offended so many people.

After our long meeting, I think he deserves a second chance whether it is with the Hawks or another team.

Racial issues with Donald Sterling last spring has made Johnson somewhat of a spokesman for the players regarding race. Ferry has been on an indefinite leave of absence since Sept. 12, after leaked recording of a scouting report Ferry read over the summer about Deng surfaced.

In the audio, Ferry described Deng who was a free agent at the time, in very racist terms based on his African heritage.

What do you think of Magic’s remarks? Should Ferry be given another chance?